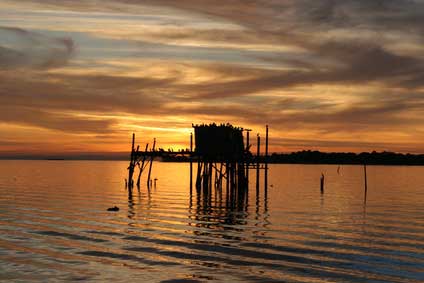 Barrier islands make up more than 700 miles of Florida’s coastline. They are naturally formed by shifting sands that build upon an existing sandbar to eventually form an island. The sand that has accumulated above the water surface becomes the home for the drifting seeds of beach plants. As the seeds grow and develop, their roots stabilize the soil, allowing the development of coastal strand and maritime hammock communities.

Barrier islands support more than 35 species of plants and animals that are listed as either rare, threatened or endangered.

Beach and dune systems, especially barrier islands, are active and are constantly being shaped by erosion (removal of sand from a beach), storms, accretion (addition of sand to a beach) and the natural drift of sand along the coast. Beach erosion and accretion are caused by ocean currents, wave action and changes in the sea level.

Over the past century, a portion of Florida’s beaches have been lost due to a gradual one-foot increase in the sea level. With an ever-changing environment, beach and dune species have adapted over time to specialized roles, connecting the survival of animal species with the survival of plant species and the condition of the habitat.

Longshore drift (the perpetual movement of sand along a coastline) and coastal winds constantly move sand along the shore, while storm events help build or erode the sand. During hurricanes and major storms, sand is removed from a beach and deposited off shore, forming sandbars. In contrast, the gentler waves shift the sand from the offshore sandbars back onto the beach. All of these forces interact to determine the slope, shape and size of a particular beach.

Barrier islands are greatly affected by the forces of wind and waves and are constantly moving towards or away from the mainland. Because barrier islands provide mainland protection from hurricanes and large storms by absorbing the impact of waves and storm water over flow, entire barrier islands can be severely reshaped or completely destroyed by a major storm.