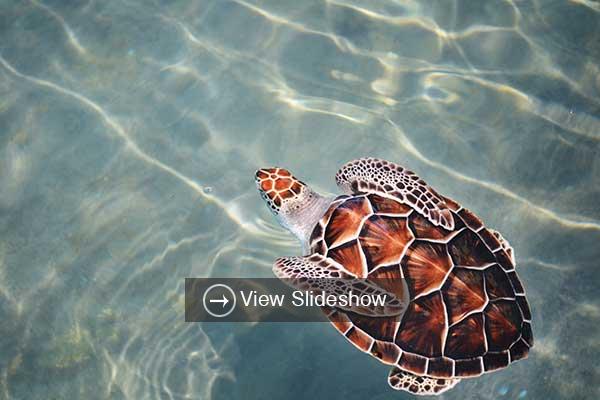 The common name is derived from the massive, block-like head and broad, short neck of the animal. It is the only turtle in the genus Caretta and is listed as a threatened species in the United States; international trade is completely banned and the turtle is considered to be vulnerable worldwide.

Loggerhead turtles are the most frequently observed turtles in Florida waters. They are one of the largest of the hard-shell turtles, with adults measuring 36 to 38 inches in length, and a weight range of 200 to 350 pounds, but larger specimens have been reported. The upper shell or carapace is widest near the front, just behind the front flippers, then tapers toward the rear. carapace is colored reddish-brown with some yellowish touches; underneath, the plastron is creamy yellow. There are five pairs of costal shields or plates on each side of the central row of plates on the carapace. The shell margin of young loggerheads has a somewhat serrated appearance which disappears as the turtle matures. The limbs are paddle-shaped and each bears two claws.

As with all sea turtles, the adult male has a long tail; the tail of the female is short. Biology. Scales on the top and sides of the head and top of the flippers are also reddish-brown, but have yellow borders. The neck, shoulders and limb bases are dull brown on top and medium yellow on the sides and bottom. The plastron is also medium yellow. Adult average size is 92 cm straight carapace length; average weight is 115 kg. Hatchlings are dull brown in color. Average size at hatching is 45 mm long; average weight is 20 g. Maturity is reached at between 16-40 years.

Loggerheads are known to travel as far north as Nova Scotia or south to Argentina. Florida- tagged specimens have been sighted in Chesapeake Bay, in the Bahamas, the Greater Antilles and in the Gulf of Mexico. As loggerheads mature, they travel and forage through near shore waters until the breeding season, when they return to the nesting beach areas. The majority of mature loggerheads appear to nest on a two or three year cycle.

Like their cousin the tortoise, sea turtles may take their time, but they are remarkably persistent, according to new evidence from an Earth watch sponsored researcher. A satellite tag was recovered in Baja, Mexico, from the flipper of a Loggerhead sea turtle that was tagged in Japan. The tag confirms that endangered loggerheads shuttle nearly 7,500 miles (12,000 kilometers) each way across the Pacific Ocean between nesting beaches in Japan and feeding grounds off the coast of Mexico.

Loggerhead turtles are essentially carnivores, feeding primarily on crabs, horseshoe crabs, shrimp, jellyfish, and a variety of mollusks. The strong beak-like jaws are adapted for crushing thick- shelled mollusks.  which they use to eat hard, shelled animals such as crabs and clams. Although loggerhead sea turtles are primarily bottom feeders, they also eat  sea jellies obtained while swimming and resting near the sea surface.

Loggerhead populations in Honduras, Mexico, Colombia, Israel, Turkey, Bahamas, Cuba, Greece, Japan, and Panama have been declining. This decline continues and is primarily attributed to shrimp trawling, coastal development, increased human use of nesting beaches, and pollution. Loggerheads are the most abundant species in U.S. coastal waters, and are often captured incidental to shrimp trawling. Shrimping is thought to have played a significant role in the population declines observed for the loggerhead.    Mating takes place in late March-early June, and eggs are laid throughout the summer.

Loggerheads are circumnavigators, inhabiting continental shelves, bays, estuaries, and lagoons in temperate, subtropical, and tropical waters. In the Atlantic, the loggerhead turtle's range extends from Newfoundland to as far south as Argentina. During the summer, nesting occurs in the lower latitudes, but not in the tropics. The primary Atlantic nesting sites are along the east coast of Florida, with additional sites in Georgia, the Carolinas, and the Gulf Coast of Florida. In the eastern Pacific, loggerheads are reported as far north as Alaska, and as far south as Chile. Occasional sightings are also reported from the coast of Washington, but most records are of juveniles off the coast of California. Southern Japan is the only known breeding area in the North Pacific.

Sea turtles are marine reptiles that have existed since their giant land turtle ancestors returned to the sea sometime during the Age of Dinosaurs. Eight species of sea turtles have managed to survive to modern times. Three of these extant species, the loggerhead sea turtle (Caretta caretta), the green sea turtle (Chelonia mydas), and the leatherback sea turtle (Dermochelys coriacea) nest on the beaches of Broward County from April through September every year. The loggerhead is the most common sea turtle using the area for nesting; as a matter of fact, Florida, from the Space Coast to the Gold Coast, is the second most important nesting area in the world for loggerhead sea turtles.

Loggerhead turtles were found buried in silt off Palm Beach Inlet and the Indian River, and lodged in the soft muddy walls of the Cape Canaveral Ship Channel. This previously unknown activity may be a type of hibernation, or simply a way to warm themselves, since they are susceptible to hypothermia in cold water. The mud covering may also serve to rid the shell of encrusting barnacles.  . . This reddish-brown turtle is named for its large head which may be 25 centimeters (10 inches) wide. Powerful jaw muscles allow the loggerhead to crush heavy-shelled clams, crustaceans and encrusting animals attached to rocks and reefs. The shell is very thick, particularly toward the back, which may serve as protection from sharks that occasionally prey on this relatively slow swimmer. It is estimated that loggerhead turtles reach maturity between 20 and 30 years of age and have a maximum reproductive lifespan of about 30 years.