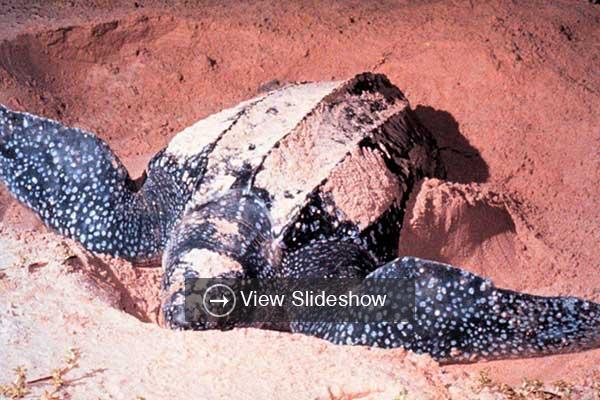 Leatherback Turtle, (Dermochelys coriacea) Dermochelys, loosely translated, means "skin-covered turtle;" coriacea means leather-like, hence the common name of the leatherback turtle. It is the largest of all the turtles, the leatherback, can weigh more than 900 kilograms (almost 2,000 pounds) and reach a length of more than 2.5 meters (8 feet).

The shell lacks the scales or shields of other turtles and is covered by a firm, leathery skin, with seven ridges or keels running lengthwise along the back. Color is usually black with white blotches. The carapace is an elongate oval, somewhat pointed toward the rear.

The endangered leatherback turtle is the largest and most active of the sea turtles. They travel thousands of miles Leatherbacks have been sighted as far north as Labrador in the Atlantic and Siberia in the Pacific, dive thousands of feet deep A leatherback fitted with a time-depth recorder made a dive of more than 3,300 feet off the Virgin Islands. In other studies over a ten-day period, the average depth of all dives of a leatherback was 222 feet and in some cases the animal was submerged as long as 27.8 minutes. The tagged female leatherback averaged 2.7 dives per hour during daylight and 3.6 dives each hour (average) at night, and venture into much colder water than any other kind of sea turtle. Up to eight feet in length, these huge turtles have a rubbery dark shell marked by seven narrow ridges that extend the length of the back.

The leatherback is the champion of sea turtles. It grows the largest, dives the deepest, and travels the farthest of all sea turtles.  The largest leatherback ever recorded was almost 10 feet (3 m) from the tip of its beak to the tip of its tail and weighed in at 2,019 pounds (916 kg). The leatherback is the only sea turtle that lacks a hard shell. It is named for its large, elongate shell which is composed of a layer of thin, tough, rubbery skin, strengthened by thousands of tiny bone plates. Seven narrow ridges run down the length of the carapace, which is typically black with many white spots. The lower shell is whitish to black and marked by 5 ridges. The body of a leatherback is barrel shaped, tapering at the rear to a blunt point. With this streamlined body shape and the powerful front flippers, a leatherback can swim thousands of miles over open ocean and against fast currents.

Leatherbacks approach coastal waters only during breeding season. Nesting occurs throughout the Caribbean, on the northern coast of South America, the Pacific Coast of Central America, and on the east coast of Florida. Nesting season runs from March through July. Leatherbacks nest every 2 to 3 years, laying 6 to 9 egg clutches in a nesting season. Each clutch contains approximately 80 fertilized eggs the size of billiard balls and 30 smaller, unfertilized eggs. There is an average of 10 days between nestings. The eggs incubate for approximately 65 days.

A leatherback turtle cannot be confused with any other animal. Hatchlings are marked by white stripes and the foreffippers are as long as the shell. Adults have a smooth, scaleless black to brown shell raised into seven narrow ridges that extend the length of the back. The limbs, head and back are often marked by white, pink or blue blotches. The rubbery top shell has a thick layer of oily, vascularized, cartilaginous material, strengthened by a mosaic of thousands of small bones. The softer lower shell is whitish to black and marked by five ridges. The smooth transition between the two shells gives the leatherback a barrel-like appearance. Unlike other sea turtles, the leatherback has no claws on its flippers.

Powerful front flippers make the leatherback a strong swimmer, capable of traveling thousands of miles over open ocean and against fast currents. The keels on the carapace and the smooth transition between the head, limbs and shell streamline the body for cutting through the water. The coloration of the leatherback, dark above and lighter below, is typical of open-ocean inhabitants.

Leatherback turtles feed on soft-bodied animals such as jellyfish and ctenophores (such as comb jellies). It is said that leatherback turtle meat may also cause poisoning in humans because of the diet of jellyfish.. ingestion of plastic bags and egg collecting are reasons for mortality and population declines.
Leatherback turtles eat soft-bodied animals such as jellyfish. Jellyfish are an energy-poor food source because they are mostly water, so it is remarkable that a large, active animal can live on this diet. Small animals found in association with jellyfish such as crabs may supplement the diet, but it is not known if these items are actually digested. Young leatherbacks in captivity can consume twice their weight in jellyfish daily. Food is sucked into the mouth by expand ing the large throat. The leatherback's jaws are scissorslike and the mouth cavity is lined with stiff spines that project backwards and aid in swallowing soft prey.

The leatherback turtle is found throughout the Atlantic, Pacific and Indian oceans, from as far north as Labrador and Alaska to as far south as Chile, the Cape of Good Hope, and the southern end of New Zealand. The leatherback is known to travel as far as 5,000 kilometers (3,100 miles) from its nesting beaches. It was once thought that the leatherback spent most of its life far out at sea, but it is now known that in the U.S. it also inhabits relatively shallow waters along the northern Gulf of Mexico, the east and west coasts of Florida and north through coastal New England. Nesting occurs on tropical and subtropical mainland shores, especially in New Guinea, Indonesia, Central America, the Guianas, and the southern Pacific coast of Mexico. Many of the major nesting areas have been discovered only within the last 20 years. Estimates of the number of breeding female leatherbacks in the world range from about 70,000 to 115,000. The number of leatherback nests recorded in Florida has ranged from 38-188 since 1979.

The frequency with which leatherback turtles are seen in northern waters suggests that they regularly migrate north in search of large concentrations of jellyfish. The presence of active, healthy leatherback turtles in cold regions is of interest because, as reptiles, their body temperature would be expected to be close to that of the water around them.

Active leatherbacks have been reported at water temperatures below 60 degree; no other reptile is known to remain active at this temperature. Leatherbacks can live in cold water because, unlike most other reptiles, their body temperature can be as much as 80°  higher than that of the environmental In addition to retaining heat produced by muscular activity, leatherbacks may be able to actively regulate their temperature.

The leatherback can dive to great depths. Turtles equipped with depth recorders dove to over 1,000 meters (3,300 feet) deep. This depth exceeds that reported for any air-breathing vertebrate with the possible exceptions of sperm whales and elephant seals. The shallowest dives occurred at dusk and the deepest at dawn. These leatherbacks were probably feeding on jellyfish that concentrate below 600 meters (2,000 feet) during the day and move into surface waters at dusk. The turtles dove almost continuously with only brief intervals at the surface to breathe.

The leatherback does not have a rigid breastbone or lower shell like other sea turtles so the chest may collapse during deep dives. The large amount of oil found in leatherbacks may help prevent decompression problems during diving and resurfacing.

The leatherback turtle migrates between the cooler, open ocean waters that support the jellyfish on which it feeds and the subtropical and tropical beaches where the sand is warm enough to incubate its eggs. Studies in the Virgin Islands have shown that leatherbacks begin nesting within a week of arriving from temperate latitudes. Mating must take place before or during migration to the nesting beaches because there does not seem to be enough time to mate and develop eggs off the nesting beach.

Leatherbacks prefer beaches with a fairly steep slope adjacent to deep water. These high energy beaches are often subject to erosion, but this topography makes the beach accessible and shortens the haul to dry sand above the high tide mark. Leatherbacks are rarely seen around reefs and rocky areas where their skin could be easily cut. Even the crawl up a sandy beach can be enough to abrade the turtle's tender skin and cause bleeding.