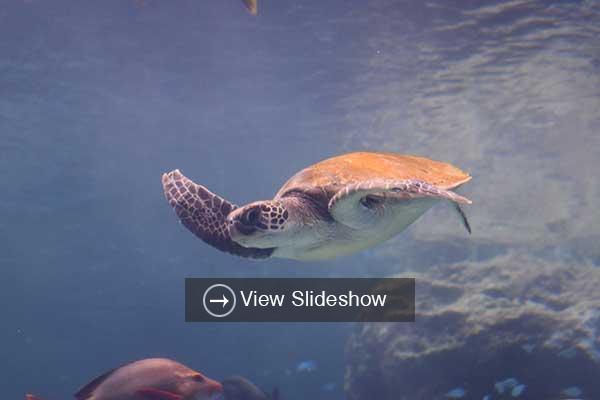 The Olive Ridley (Lepidochelys olivacea) is the smallest of the sea turtles usually less than 100 pounds and named for the olive color of its heart-shaped shell
This is an omnivorous turtle  It forages offshore in surface waters or dives to depths of at least 150 meters (500 feet) to feed on bottom dwelling shrimp, crabs, sea urchins and other animals crustaceans, mollusks and tunicates.. Olive Ridley  are sometimes seen feeding on jellyfish in surface waters.

The Olive Ridley is found in the tropical waters of the northern Indian Ocean, the eastern Pacific Ocean, and in the eastern Atlantic along the coast of Africa. In the western Atlantic, most nesting occurs in Surinam along a short stretch of beach. The Olive Ridley has never been reported in Florida. Most populations nest on mainland shores near the mouths of rivers or estuaries and, therefore, are closely associated with low salinity and high turbidity water.
Nesting
An average clutch size is over 110 eggs which require a 52 to 58 day incubation period. The olive Ridley inhabits tropical and subtropical coastal bays and estuaries. It is very oceanic in the Eastern Pacific and probably elsewhere too. Large arribadas of olive Ridley's still occur in Pacific Costa Rica, primarily at Nancite and Ostional and Pacific Mexico at La Escobilla, Oaxaca.
The Olive Ridley was once thought to be a solitary nester. Large flotillas occasionally were reported by passing ships or along coastlines but their destination was unknown. In the 1970's, however, it was discovered that, like the Kemp's Ridley, some populations of Olive Ridley  synchronize their nesting in mass emergences or ariibadas. Thousands and even tens of thousands of Olive Ridley ; nested during arribadas that would continue for several nights. Today Olive Ridley's nest in relatively large numbers on a few protected beaches but most populations have collapsed as a result of over exploitation of egg and of skins for the leather trade.